Oh, how good and how pleasant it is, the Psalmist declares, to dwell together in unity. Of course, to be unified, you have to dwell!  Many today are concerned that the church seems to be a spent force in the West. The cultural battle seems to have been all but lost. And yet Jesus said, “I will build my Church, and the gates of hell shall not prevail against it.” (Matt 16:18).

Could there be a link between survival and unity? Part of the failure of the church to thrive maybe because we have forgotten Jesus’ prayer in John 17, where our Lord asks the Father to protect his people, and to sanctify them, and to unite them as one. But, if that is the case, we must understand what Jesus is really asking for in this prayer, and look at how the church has understood it throughout her history.

The Saviour’s Appeal for Unity

Now, what is Jesus’ prayer that his followers “may be one” actually asking for? In John 17, Jesus asks the Father to glorify him, as he has glorified the Father in gathering those called out fo the world for God’s purpose and given to Jesus as his followers. The Son then asks the Father to protect the believers which will be left in the world after Jesus’ departure. He asks that they be sanctified or set apart by God’s Truth (17:17). This flows from verse 11, where the Lord, “keep them in your name . . . that they may be one even as we are one.” The unity Jesus calls for, in this context, is a unity that is like that unity existing between the Father and the Son. It is based on truth and sanctification.  Both of these are the works of the Holy Spirit. And all true believers are drawn into the unity Christ prays for.

Jesus had been clear already: the world would know who were his disciples by the way that they loved one another (John 14:35). He now asks the Spirit to keep them together, a these the rest of Scripture will pick up.

The Biblical Appeal for Unity

The New Testament envisions this unity as reality: “[4] There is one body and one Spirit—just as you were called to the one hope that belongs to your call—[5] one Lord, one faith, one baptism, [6] one God and Father of all” (Eph 4:4-5).

The Spiritual Appeal for Unity

Despite this Scriptural appeal and the sanctification that is true of every believer, Christians still can and do sin. And with regards to unity, there has been an obvious backsliding. We are not unified. It seems, that (as with many spiritual truths) the weaknesses of the flesh, and the sins of believers have quenched the work of the Holy Spirit, at least in part.

We can be sure that the Spirit will never truly fail. Jesus’ prayer go altogether unanswered. But like a great many things in his Kingdom, the full completion of this prayer may await the final consummation of the Kingdom at his return. So does this mean we must simply surrender to the inevitable and give up? Should we cease striving against the flesh?

Obviously not. Despite our sin nature and the weakness of the flesh, we are called to cooperate in the work of the Kingdom. Believers are to “go into all the world and make disciples” (Matt 20:18). We pray, “your kingdom come, your will be done, on earth as it is in heaven” (Matt 6:10). We are to pursue  “the ministry of reconciliation” (2 Cor 5:18).

The Church is called to reconcile, to bring unity between God and man, and between man and man. Unity is a fundamental of the Christian faith (of which I will say more in my next post–link). 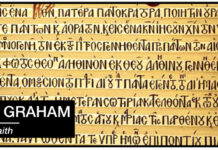