Disagreements often boil down to perspective. There are two sides to every story. I think this is something everyone instinctively knows. Parents share the common experience of having a child come up to them, upset, crying, indignantly complaining that “so and so did such and such!” So and so, however, has a significantly different account, blaming the first child. This alerts us that there might even be more than two sides to a story. I once heard it said there are three: (1) your side, (2) my side, and (3) the truth!

Observational Perspective and the Three Sides to Every Issue

What does it mean to say that there are three sides to every story? Notice that neither side (1) or side (2) is synonymous with side (3), “the truth.” By nature, we humans are contextual observers. We see things from a certain point of view. Again, the observations we make about children bringing mutual blame illustrates this. On occasion I have actually observed an incident between two of my children. Each turned to me indignantly, ready to paint the other as wholly the culprit, and themselves as wholly saintly in the exchange. The truth was that there was a mixture of part angel and part fiend in each of them!

Experienced in law soon teaches that point of view makes it challenging to establish facts, or to build a case through eyewitnesses. Eyewitness tend to be honest and forthright … and wrong. This is probably the reality behind the wisdom of the ancient Hebrew legal code: “A single witness shall not suffice . . .  Only on the evidence of two witnesses or of three witnesses shall a charge be established” (Deuteronomy 19:5).

It doesn’t really matter the context. A parent, hearing a complaint from a child, a manager, hearing an employee’s complaint about a co-worker, two co-workers gossiping about another, a conflict in church, or a sports club, or even a dispute at law. The principle of perspective is the same: “The one who states his case first seems right, until the other comes and examines him” (Proverbs 18:17).

We all observe things from some perspective. It might be a perspective of physical observation (the eyewitness to a traffic accident on the sidewalk may see things differently than the passenger eyewitness in one of the cars, and the eyewitness driving another vehicle behind the accident scene). But these perspectives can be internal as well.

Perspectival Observation and the Three Sides to Every Issue

I really don’t think that the claim that every story has (at least) two sides is very controversial. In fact, I suppose that everyone who reads this will readily agree with me. Most will also agree that when we are in a conflict, we forget this. I think my kids know that there can be more than one side to a story. But they are usually not inclined to listen to their bother/sister’s point of view on the matter.

We grown-ups are not much better, are we? Just the other day I found myself embarrassed when I chewed out one of my kids for something I found to be very naughty. However, after I calmed down, they explained to me that they were doing what their mother had asked them to do. I confirmed this quickly. Then I apologized to my boy. Sometimes we parents need to apologize to our kids. But that is part of another discussion.

When I reacted poorly to my child’s activity, I was doing something we all do. Earlier I noted how we all observe things from certain perspectives. Having illustrated this in regard to the external eyewitness to an accident, I suggested that some perspectives are internal. It may be, that while their perspectives differ, all three eyewitnesses to the accident are able to identify overlapping central features that account for the accident and show fault in one of the drivers. But, when challenged, that driver may very well see things rather differently.

We don’t tend to see our own bias toward ourselves. It has been said that we readily find faults in others that we would never ascribe to our own behaviour. Think about your own life. You have probably had a conflict with a co-worker, or spouse, or parent, or friend, in which you felt totally justified in your actions. But, when you considered the other person, you saw their part as vindictive, petty, and mean. Later, when you have had time to cool off, you might have come to feel badly, to apologize and admit your fault. Other times, you never come around to reconcile. Your relationship is ruined, and you wholly blame the other party. This is personal bias.

We might add national, racial, religious, cultural and political biases. I could enumerate others, but I only which to illustrate the point. Our observations of the world always come from our own perspectives. These perspectives may be physical locations, or something like personal biases.

It is here that we make the jump I made with my child. We assume that the truth is co-ordinate with our perspective. I assumed I knew all the relevant facts. I then formed a judgement based on my perspective alone. And then I acted. In my mind, I was fully justified to chew my kid out, and to announce some form of discipline.  I pontificated to a child from a throne of self-righteousness. And moments later I had to eat crow.

Perspective, Observation, and the Three Sides to Every Issue

If our point of view shapes our observations, and our observations shape our perspectives, are we caught in a vicious circle? Yes. This is the great problem in political discourse today (at least in the Western democratic world to which I am a daily observer). Over and over, we see political actions prejudged based on the party which proposes them. We witness conflict in clubs or churches, in families and friendships.

The first thing that we need to do is to listen well, a topic I discussed in another post. James, known for his personal integrity and wisdom, urges us, “let every person be quick to hear, slow to speak, slow to anger” (James 1:19). This is advice I need to regularly give to myself! 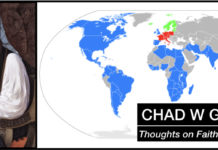